WASHINGTON — This summer has been a good one for pro-Palestinian candidates running for the US Congress.

Illhan Omar, who has called Israel an “apartheid regime,” won the Democratic nomination for a Minnesota House seat.

And Rashida Tlaib, a Palestinian-American who calls for a one-state solution that would spell the end of Israel as a Jewish state, and for gutting US military aid to Israel, won her party’s nomination for a Michigan House seat.

All of these candidates are heavily favored to win the general election in their reliably blue districts. And they are posing a question for Washington’s pro-Israel establishment: What does their collective ascendance forebode about the future of US-Israel relations?

The answer depends on who you ask. Pro-Israel operatives who focus on maintaining bipartisan support for the Jewish State insist it means very little. Presuming they go to Capitol Hill, they will be just three of 535 members of Congress.

In this November 6, 2008 photo, Rashida Tlaib, a Democrat, is photographed outside the Michigan Capitol in Lansing, Michigan. (AP Photo/Al Goldis)

“Viewed in the context of all of the congressional candidates running this year, we anticipate that the next Congress will continue to have a strong bipartisan consensus in support of the US-Israel relationship,” an AIPAC spokesperson told The Times of Israel.

But there are others who think what’s beginning to unfold is the inevitable outcome when an Israeli prime minister aligns himself, or is perceived to align himself, with one political party, and who advances policies that are known to ostracize America’s progressive movement — with which most US Jews happen to associate.

“It’s troubling,” said Seymour Reich, a former chair of the Conference of Presidents of Major American Jewish Organization, US Jewry’s umbrella group, and international president of B’Nai Brith. “This government of Israel doesn’t understand that its policies are losing support not only with American Jews but many on the left.”

“The Israeli government seems to be relying on Republicans and evangelicals for its long-range support,” he went on, “and that’s a losing proposition.” 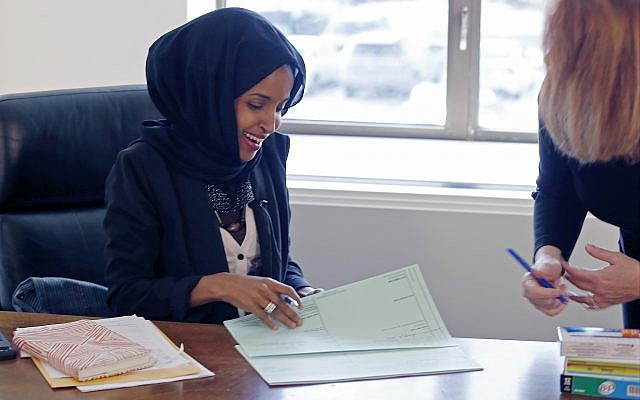 Ilhan Omar, Democrat Minnesota House of Representatives, seen here after she was elected to the state legislature in January 5, 2017. (Jim Mone/AP)

Some of these candidates are beyond the pale for even Washington’s most fervent defenders of Palestinian rights. The Middle East advocacy group J Street withdrew its endorsement of Tlaib on Friday afternoon, citing her opposition to a two-state outcome between Israelis and Palestinians.

“While we have long championed the value of a wide range of voices in the discussion of the conflict and related issues, we cannot endorse candidates who come to the conclusion that they can no longer publicly express unequivocal support for a two-state solution,” the organization said.

But Jewish Democratic leaders, for their part, argue that the emergence of these three candidates don’t reflect a broader trend within the party. 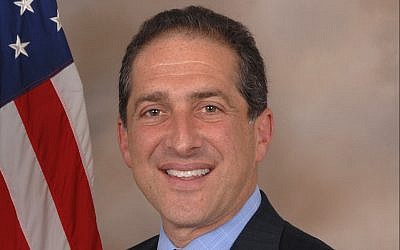 “It means nothing about the Democratic Party,” said Ron Klein, a former Florida congressman who now chairs the Jewish Democratic Council of America. “It means we have two or three candidates in those communities who we don’t think are supportive of Israel and our role is to reach out and inform them about our positioning and see if can persuade them.”

Klein said that his organization — the Democrats’ political advocacy arm with the American Jewish community — has been in touch with Ocasio-Cortez’s staff, and they are planning a meeting for after the election.

Ocasio-Cortez, a rising political star who has denounced Israel’s “occupation of Palestine” and called the killing of Palestinian protesters by Israeli troops at the Gaza fence in May a “massacre,” has tempered some of her stances. On a July edition of PBS’s “Firing Line,” the 28-year-old said she was “not the expert” on the intractable Israeli-Palestinian conflict.

Klein is also quick to note that her campaign was centered not around Middle East politics, but social issues, like racial injustices and growing inequality.

“If you understand where she came from, her candidacy, she was all about domestic liberal issues: Bernie Sanders, healthcare for all, free higher education for all, very socially liberal positions,” he said. “The positions she took on Israel were not what she based her campaign on.”

Meanwhile, there are some in the pro-Israel sphere who don’t associate with either party, but who think US President Donald Trump is at least partly responsible for the rise of candidates highly critical of Israel. 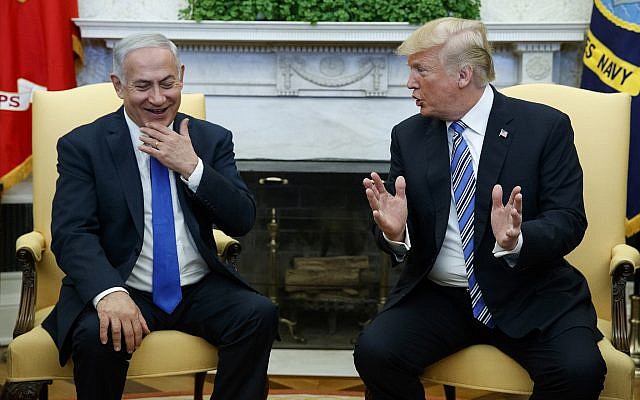 “The extreme progressive wing of the Democratic Party has been energized by Donald Trump’s presidency and they are coming out in force,” said Ron Halber, the Jewish Community Relations Council of Greater Washington’s executive director.

Beyond his close relationship with Prime Minister Benjamin Netanyahu, Trump delighted Israelis and intensely angered Palestinians over his decision last year to formally recognize Jerusalem as Israel’s capital, which culminated in his opening the new US embassy there in May.

Palestinian Authority President Mahmoud Abbas fumed over the Jerusalem recognition last December, and has since refused to meet with Trump officials, casting them off as unable to act as honest mediators in any negotiating process.

That may have galvanized candidates and constituencies who are already antithetical to Trump to take a stronger stance on behalf of the Palestinian cause, Halber suggested.

“Among the population of people who are running, there are many who have hostile views [toward Israel],” he said. “But I still believe that the majority of the Democratic Party is pro-Israel.”

At this stage of Trump’s term, and with an American political landscape rapidly changing, it’s not quite clear how marginal such candidates as Ocasio-Cortez, Omar, and Tlaib will prove to be in the not-too-distant future.

“Is it a wave or is it a ripple?” Halber wondered out loud. “Or is it a bubble?”