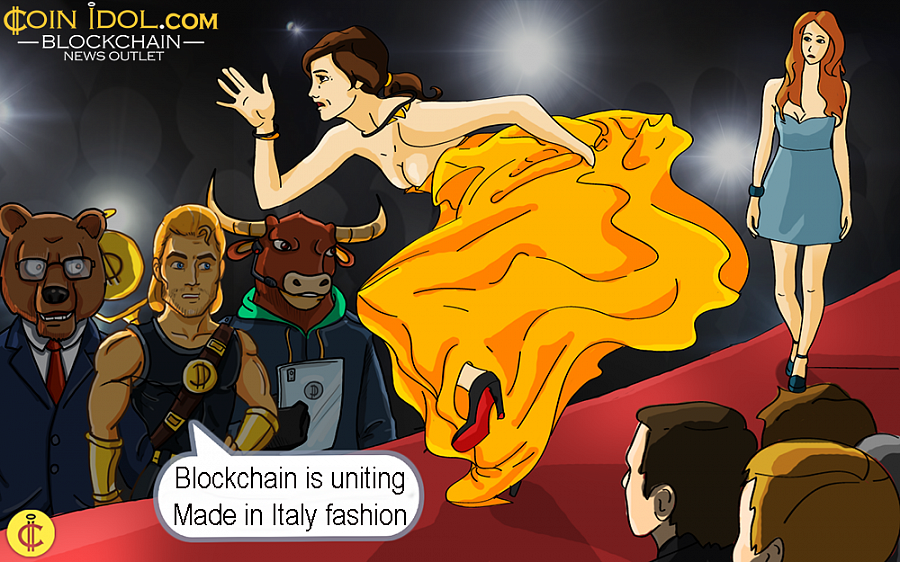 A lot of people think that blockchain technology is only about Bitcoin (BTC) – which is identified as an encrypted transaction database greatly associated with the utilization of cryptos and is still evolving on a significant scope. Every ‘block of the chain’ has data which is verified and isn’t possible to manipulate or modify without being tracked in real-time, by anybody that has access to it. Distributed ledger technology (DLT) is compared to a communication protocol which will largely cause a revolution in several sectors, like how the internet has changed everything since the mid-90s.


The traceability, monosemous, transparency, and disintermediation of every exchange in the chain are what makes this technology superior and outstanding. Statist forecasts show that the market now stands at $584.2 million and is expected to hit $2.3 billion three years from today, according to a
report by Tech Economy.


The fashion industry, the lofty explicit of Made in Italy creativity and originality, is among the sectors stimulating massive interest positively.


The benefits of DLT in the Italian fashion industry is now known by many people including non-professionals. The
Lanieri Fashion Tech Insights 2018, a study of e-commerce that was made-to-measure men’s suits shows that around 1 citizen out of 5 believe that DLT will ensure the creativity of a garment and stop duplicating by almost 18%, and will also enable the verification of the materials’ origin by around 19%.


The uses of DLT in fashion industry originate from its special feature of setting an offline-online connection between commodities and their digital owners, by effectively recording them in a ledger compared to a big shared excel sheet where everyone is clear and able to see any changes made. A serial number, in this case, works as an identifier that links every individual commodity to its ‘digital twin.’ So, the fake products that will not be possessing this physical-digital connection, which will make it very easy to be detected, and also any attempt to steal the product will be easily noticed.


The online-offline link provides massive opportunities to have a more trusted and transparent supply chain to an extent of even recording the passage on blockchain each time the goods change hands. This makes it possible to know the origin of the product and the raw materials that were used to manufacture it. So, this will play a big role in ascertaining the products designed and made 100% in Italy – but not those that are just assembled there.


DLT has the ability to enhance the protection of intellectual property particularly for developers and trademark owners. It will also enable designers and other stylists to properly document every stage of the creative process hence giving unchangeable proof in case of any dispute.


Data from Censis-Mise shows that in 2014 alone, the counterfeiting of Made in Italy commodities and fashion caused bad turnover of more than 6.5 billion euro and deducted around 105,000 jobs, with a shortfall of around 5 billion plus over 300 million euros of revenue.

BTC & Made in Italy Luxury


It’s not true that DLT only focuses at BTC, but it is extremely correct that innovation in payment ways is a major factor in elevating the sales process and exports since both online and offline sales platforms are highly integrated into a more effective omnichannel key. Cryptomnets are still nascent in the globe online Italian shopper.


However, according to the Fintech and Insurtech report, there is now an increasing number of blockchain technology projects being conducted by Italian financial institutions, according to the recent
report by Coinidol. This shows that DLT is being largely adopted in several sectors in Italy.


Read more news about blockchain and the cryptocurrency industry of Italy in the Italian language at
www.it.coinidol.com