IG Client Sentiment Reportshow retail are 77% long of Bitcoin – normally a contrarian bearish signal – but recent daily and weekly changes suggest that Bitcoin may rise further in the short-term. Download the report to see how it can help you make more informed trading decisions.

Bitcoin (BTC) Rebound will be Shallow and Short-Lived

After falling around 20% in the last two weeks, Bitcoin has picked up a bid at the lower levels and crept back above $7,000, but the move looks weak and unlikely to continue. A ‘head and shoulders’ chart formation is taking shape which suggests a break lower soon, while BTC trades below the 20- and 200-day moving average and just a fraction above the 50-day ma. Initial support will be found around $6,438, before $5,932 and $5,622 come into play.

Ripple has broken through noted support at $0.425 leaving the way open for further, heavy falls back to levels seen at the end of last year. The support level, made of a double low on June 29 and July 13 this year has acted as support for the last week, but Monday’s breakdown leaves little support for the third largest cryptocurrency. 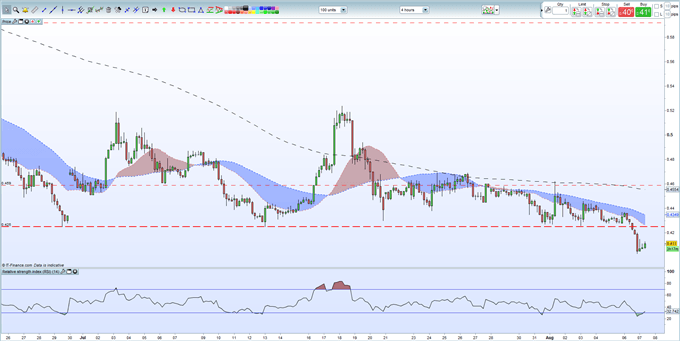 A look at a longer time frame shows that support does not come into play until around $0.25 -$0.27 level, highs seen in mid-to late-November last year before the rally to $3.25 took off. The token trades below all three moving averages, although the RSI indicator points to consolidation/small rebound in the short-term. 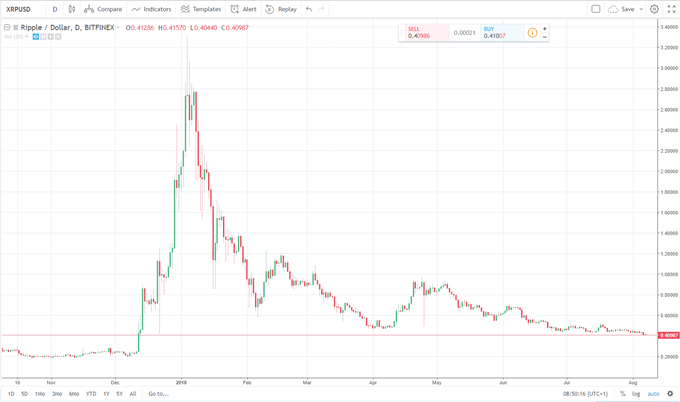 We cover Bitcoin, Ripple and a range of other cryptocurrencies, at our Weekly Cryptocurrency Webinar on Wednesday at 12:00pm.