It’s been a terribly rough two weeks for altcoins, and the situation doesn’t appear to be getting any better. Nobody’s price is safe, including Ethereum (ETH), ADA, XRP, XLM, and BNB.

ETH00 remains in a tough spot, and so far there is no silver lining as ETH price is now now at at a 9-month low after 18 days of posting lower lows on the daily chart. The daily RSI has dropped below 20 and could descend a bit further as it did in April when it fell to 16.

Since ETH is typically hinged to BTC 00 price, it might be good to also keep an eye on BTC’s RSI. BTC’s RSI is not as deeply oversold as ETH’s, meaning ETH could fall further.

As mentioned previously, ETH has met strong resistance at the overhead moving averages and barring a high volume breakout, ETH is likely to be pinned down at this point. Considering the state of the RSI means an oversold bounce is in order but there are many resistance levels for ETH to overcome. 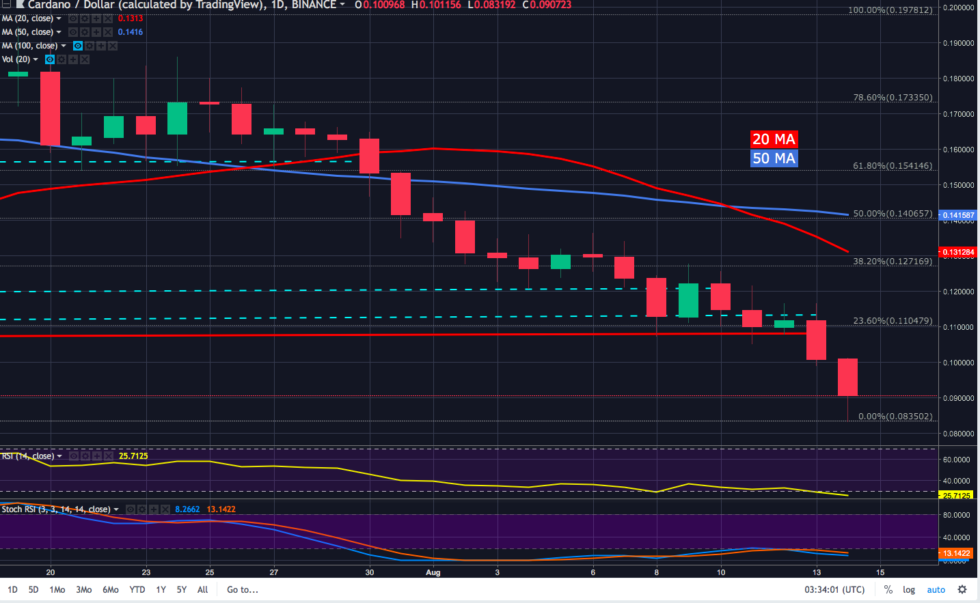 The daily chart shows a full retrace from recent highs ($0.1978) and former supports will now function as resistance. In the event of a turnaround, ADA 00 will struggle to gain above $0.1222 which also aligns with the 23.6% Fib retracement level. For the time being, bears are full control with the next target being $0.079, a price not seen since December 8, 2017. 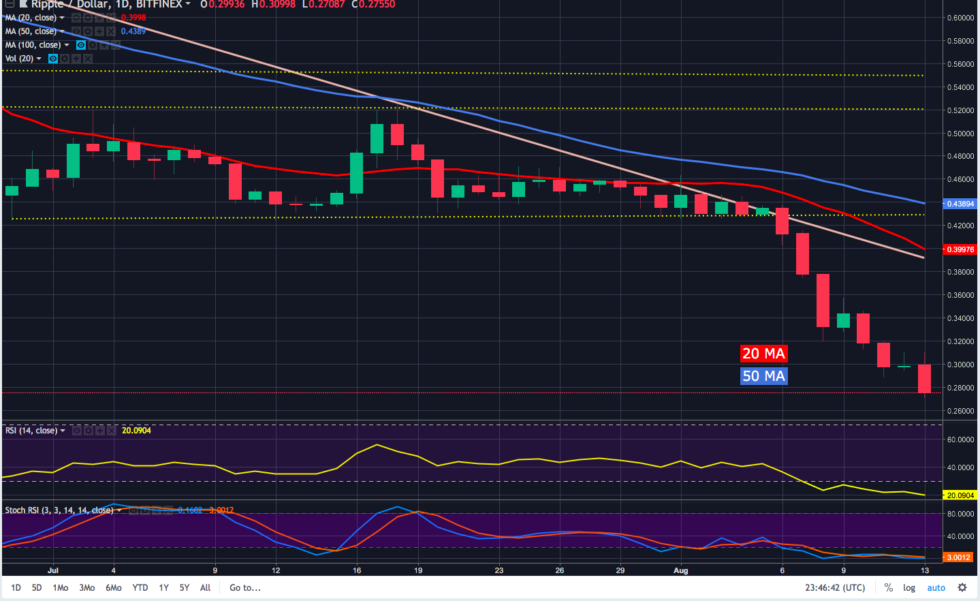 XRP 00 has posted lower highs for nearly 13 days and volume has declined significantly— until a break in sell volume yesterday dropped XRP below the 0.42 support. $0.228 is the next support, while $0.309 stands as resistance.

Yesterday XRP appeared to consolidate in preparation for a move which today turned out to be bearish. A drop below $0.28 would place XRP in territory not seen since Fall 2017. 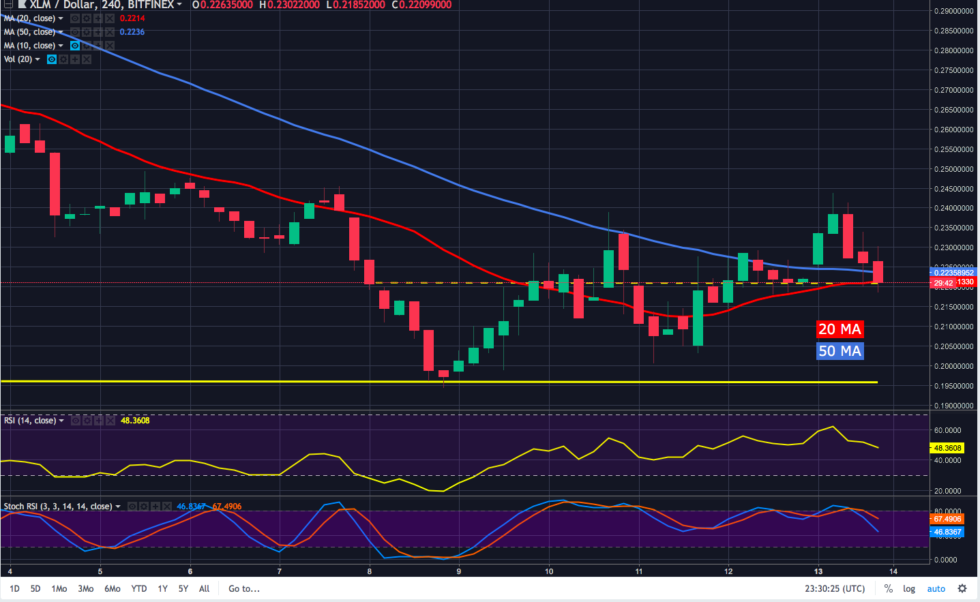 Stellar Lumens 00 remains one of the few altcoins that has posted impressive gains lately. This is probably connected to the rumored Facebook meeting / partnership. XLM has cooled off from its late July highs near $0.35, and last week was able to bounce from $0.19. At the time of writing, it currently trades between the 20 and 50-day MA as the 20 appears set to cross above the 50 in the near future.

XLM pulled back from $0.25 today as the Stoch became oversold. It appears XLM’s pullback is connected to the general downturn in cryptocurrency prices today. XLM is likely to encounter resistance at $0.26 and there is support at $0.21 and $0.19. 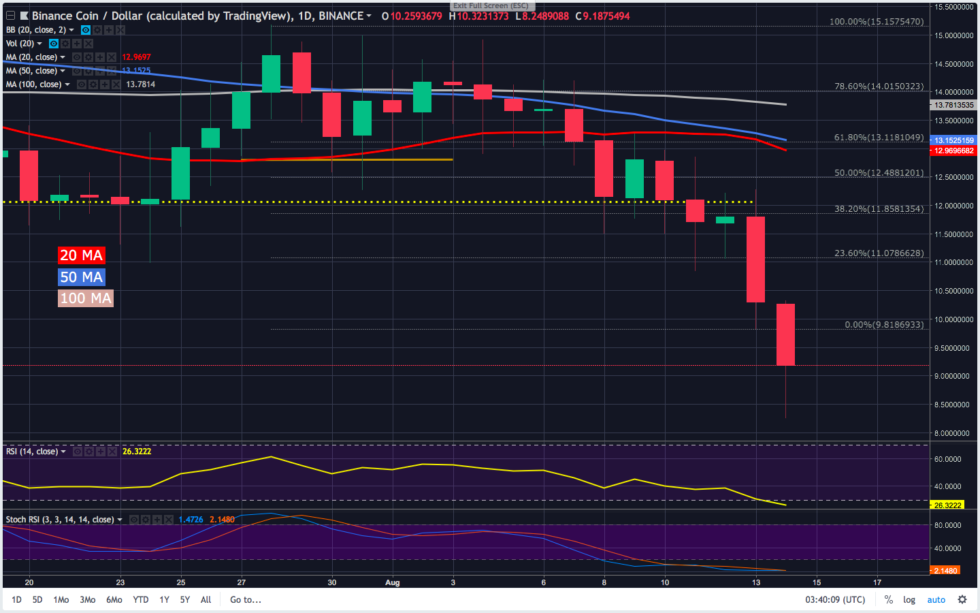 BNB 00 has fallen to a new low not seen since March 30th and, like other cryptocurrencies, the Stoch and RSI are deeply oversold and have sunk to levels not seen since mid-March. BNB feel below a crucial support at $12.05 which aligns with the 38.2% Fib retracement level.

The 20 and 50-day MA remain below the 100-MA, suggesting further decline as the path of least resistance. As an exchange token on the world’s largest cryptocurrency exchange by volume, BNB typically performs well during rallies and corrections. We expect that the token will be one of the first to recover as the market begins to recover for the current pullback.

[Disclaimer: The views expressed in this article are not intended as investment advice. Market data is provided by BITFINEX. The charts for analysis are provided by TradingView.]

Where do you think Altcoin prices will go this week? Let us know in the comments below!