Imagine if while you were shopping for produce, you could scan an apple and see its entire history, from the moment it was picked from a tree, all the way to your local grocery store — right on your smartphone.

That’s just one of the ways that companies are planning to use blockchain technology within the food industry. The same networked record system that powers cryptocurrencies such as Bitcoin is now being used to document the origins of what we eat, and even, potentially, help trace the origins of contamination outbreaks.

In an era in which the food we consume on a daily basis is plagued by fraud — from misleading labelling to products that just aren’t what they claim to be — the promise of a more transparent food supply chain is certainly appealing.

But while major organizations including IBM and Walmart are already investing in this new technology, some food safety experts are skeptical about its ultimate viability.

Walmart has completed multiple pilots, including a trace-back exercise that tested how long it would take to track the origins of a package of mangos.

Using a blockchain system in which everyone involved in the food growing and distribution process used the same collaborative software, they claim to have been able to track the origins of the shipment in a matter of seconds. This would have taken a week or more had they been relying on traditional infrastructure in which the different parts of the supply chain all use their own separate systems and processes.

Blockchain creates an unalterable record of transactions with each new entry. In addition to tracing the origins of specific foods, it’s can also be used to certify information about individual suppliers.

For instance, the UK-based company Provenance works with suppliers to verify their claims — be it that a farm is certified organic or independently-owned, or to prove and log its location as a record for consumers who are committed to eating more local foods. In this way, the company says, they’re helping people better understand the food they’re consuming.

Provenance founder Jessi Baker says blockchain can “tell the story of the food we eat.”

A lettuce worker washes romaine lettuce in Salinas, Calif,. in this Aug. 26, 2007 file photo. Critics of blockchain tracking for food safety say it won’t be able to react fast enough in cases like an E.coli outbreak that has plagued the supply chain for romaine in recent months. (Paul Sakuma/Associated Press)

But if that all sounds too good to be true, for some, it is.

“Blockchain has potential promise, but the hype has to be separated from the facts,” says Lawrence Goodwin, director of the Food Safety and Quality Program at McGill University.

“Hype has blinded many to the actual details that need to be ironed out before it is implemented,” he adds.

By the time we know of the outbreak, it has all been consumed, and there is nothing to recall.-Lawrence Goodwin, McGill

While Walmart’s lightning-fast mango test might sound impressive, it doesn’t account for the complexities of a real-world food tracking, especially in the case of a contamination outbreak, says Goodwin.

“In order for public health officials to know that there is an outbreak, those people have to go to a doctor or hospital, but most people do not, so it takes weeks or even months before we know that an outbreak is happening.”

For foods that have very short shelf lives — like romaine lettuce, which has been an ongoing cause of concern during an E.coli outbreak that’s taken months to trace back to its origins — “by the time we know of the outbreak, it has all been consumed, and there is nothing to recall.”

Relies on honesty at the source

In other words, Goodwin says, until the source of the contamination is known, a blockchain food tracing system can’t be helpful.

What’s more, the premise of a transparent record of origin requires that the data input at the source is accurate. And given the high rates of food fraud worldwide — like sugary, watered down maple syrup, or tilapia posing as halibut — there is little reason to trust that the information recorded on the blockchain is valid, says Goodwin.

Nonetheless, the hope is that once the source of an illness outbreak has been identified, blockchain technology could speed up the process of tracking the origin of the contamination. Additionally, because of its comparatively transparent nature, it would push suppliers at every step of the chain to be more accountable.

Of course, that would still require all of those suppliers to invest in the blockchain solutions. That could be the biggest challenge in successfully implementing this kind of tracking system. 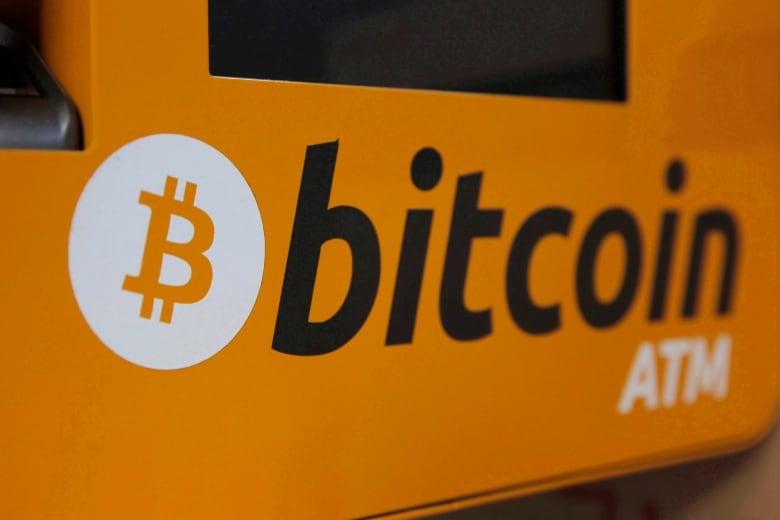 A Bitcoin logo is shown is displayed on an ATM in Hong Kong on December 21, 2017. There’s still a lot of confusion and distrust around the technology behind the famously volatile cryptocurrency. (Kin Cheung/Canadian Press)

After all, blockchain is still relatively new and untested. And for many people, it’s known best as the technology that powers Bitcoin, the highly volatile, extremely controversial, form of cryptocurrency.

So while companies like Walmart are eager to invest in blockchain solutions, for smaller organizations, their perception of blockchain — and all of its Bitcoin baggage — could be what keeps them from buying in.

And that’s a challenge, because for blockchain-based food tracking to really work, it requires everyone involved in that complex system of growers, processors, distributors, and retailers, to get on board.